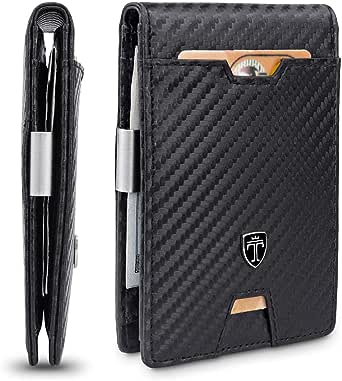 4.6 out of 5 stars 363 ratings
International product from outside the UAE

Your question might be answered by sellers, manufacturers or customers who bought this product.

Fed up with the old over-sized wallet, that bulges out your back pocket?

With our Slim Wallet you can hold up to 8 credit cards and bills while slimming down your pocket!

You can use the cardholder not only to hold credit cards, but also to clip bills inside. Our slim wallet was designed to fit perfectly in your pocket.

What you can do with the Travando® Slim Wallet:

What makes it unique:

Add the Travando® Slim Wallet in your shopping cart and slim down your back pocket!

How are ratings calculated?
To calculate the overall star rating and percentage breakdown by star, we don’t use a simple average. Instead, our system considers things like how recent a review is and if the reviewer bought the item on Amazon. It also analyses reviews to verify trustworthiness.

Charlie
5.0 out of 5 stars Excellent Overall, A Couple Very Minor Gripes From Perfect
August 27, 2020 - Published on Amazon.com
Color: CarbonVerified Purchase
This is an almost perfect thin wallet, and I'm very particular. Short version, I put 6 cards, 10 bills, and a dollar of change in this wallet (as well as a folded up check just in case), everything except the change is easily accessible, and it's still just 3/4" thick, which is comparable to any slim wallet out there. Yes, the change pocket is small and difficult to get coins out of, but there are very few slim wallets with any change storage at all, and certainly nothing better at this price range. The change pocket could definitely hold considerably more in a pinch, but would start to get bulky with much more.

Yes, as some complain, you won't be able to fit quite everything claimed all at the same time, but that's hardly unusual with thin wallets. The trick to fix basically all the complaints I've seen in other reviews is to understand how the money clip side of the wallet is arranged. The card slots on that side run inside the money clip. With even one card in that side, the money clip is tight enough to secure even a single bill, in my experience. Now, with more than one or two bills in there, you'll have trouble using that side with more than one card because the slots get very tight after that. But, there is room for two or three cards under the coin pouch, so you can move cards in and out of the bill clip side depending how many bills you have at the moment.

My very minor gripes are:

1) The emblem on the front is fairly thick and obstructive for a slim wallet. I was able to pry it off fairly easily (it's attached by bent portions through the outside card slot material, not glue, which is very nice, really). It did leave a bit of damage on that flap, shown in a picture, but I don't think it will be too noticeable once the wallet starts getting worn in.

2) The zipper pull on the coin pouch could be either much smaller or a soft pull. The current one tends to either swing and click against the cards in my pocket or get trapped sideways between the halves of the wallet as I close it.

Not major issues at all, so still 5 stars considering that it's vastly superior to anything else in remotely the same price range as a slim wallet with coin storage.

SpeedyT-Rex
3.0 out of 5 stars Good slim wallet but with a flawed to keep it from perfect
January 7, 2019 - Published on Amazon.com
Color: CarbonVerified Purchase
Overall seems like a very good slim wallet. I like the materials it builds with, the design is also very nice. The only thing I found that is considered as a slightly flaw would be the money clips is being too loose (not sure if it’s design issue or if I receive a defective product). If you have less than 10 bills, it won’t able to clips the bills securely to the wallet without foldering. Which only works if you fold them in half then clips them. I believe for slim wallet like this should design to holds the bills tightly , rather let you clips bulky bills which defeats the main purpose the slim wallet. I would rate it as 3.5 stars.
Read more
5 people found this helpful

Kindle Customer jeannie macek
4.0 out of 5 stars Big Improvement!!
November 30, 2018 - Published on Amazon.com
Color: CarbonVerified Purchase
I received this product a few days ago and began using immediately. The most notable change from my previous wallets is the slim profile. In the past all of my traditional wallets have been big and bulky. This model fits either my front or back pocket very comfortably. The styling is first rate. The only negatives are the change pocket and the money clip. I have not used the change pocket. It seems to be a little incongruous. Why add bulky coins to a slim profile wallet? It would work well for paper receipts I suppose. Also the money clip spring is a little loose. It works well if you carry a large amount of bills but for a small amount they have to be folded several times to secure them.
Overall I love this product!! Would recommend to anyone looking for a slim profile wallet.
Read more
4 people found this helpful

Jon S.
5.0 out of 5 stars Great all-around wallet
April 4, 2019 - Published on Amazon.com
Color: CarbonVerified Purchase
I'm very impressed with this wallet, as it is not only stylish but very functional as well. I saw that some people complained about the inner money clip being loose, but I took another reviewer's advice and just pushed it down slightly with a pair of pliers. it didn't even move down that much but needless to say that very small gripe is now fixed. Overall I love this wallet because it has lots of storage but still stays thin.
Read more
5 people found this helpful

J. Talbert
3.0 out of 5 stars Nice wallet. I like it but...
October 24, 2019 - Published on Amazon.com
Color: CarbonVerified Purchase
Nice wallet. Nice design and over-all build quality. I Love the card slot on the outside, where you can just tap the card for easy access to your most used card.

They brag, designed in Germany. I would give this 5 star except for the zipper. You can use good zippers, decent zippers or terrible zippers. The zipper pull on this wallet feels like a zipper would feel coming from a cheap toy from a dollar store or a cheap carnival prize.. It kinda feels like plastic, but it may be metal, I think. Sure you dont want to add a lot of weight to the wallet but you can use a bit better quality metal/plastic on the zipper. Also the money clip bend at the top digs into the wallet on the other side and with this, I question the durability and a lifespan of this wallet.

Also is this leather or canon fiber? It has a carbon fiber design, but also just examining the wallet for this review, there is a scratch on the inside? How did that happen? It's not a light scratch either. I do not put it in a pocket with any thing that should really scratch it.

Writing this review, I think I talked myself into returning it and buying another wallet.
Read more
Go to Amazon.com to see all 182 reviews 4.6 out of 5 stars

Page 1 of 1 Start overPage 1 of 1
Previous page
Next page
Discover the best of shopping and entertainment with Amazon Prime
Prime members enjoy FREE Delivery on millions of eligible domestic and international items, in addition to exclusive access to movies, TV shows, and more.
> Get started
Back to top
Get to Know Us
Shop with Us
Make Money with Us
Let Us Help You
EnglishChoose a language for shopping. United Arab EmiratesChoose a country/region for shopping.
© 1996-2020, Amazon.com, Inc. or its affiliates