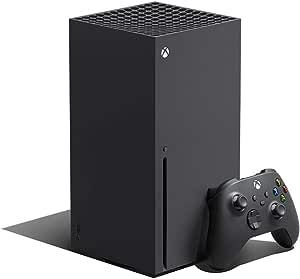 Deals related to this item

Introducing Xbox Series X, our fastest, most powerful console ever, designed for a console generation that has you, the player, at its center. Xbox Series X is powered by our custom-designed processor leveraging AMD's latest Zen 2 and RDNA 2 architectures. The new system on a chip (SOC) has been built from the ground up for speed and performance, with 12 teraflops of processing power and with compatibility in mind for four generations of games.

Introducing Xbox Series X—our fastest, most powerful console ever, designed for a console generation that has you, the player, at its center.

Most powerful Xbox ever

Explore rich new worlds and enjoy the action like never before with the unmatched 12 teraflops of raw graphic processing power.

4.6 out of 5 stars
4.6 out of 5
100 global ratings
How are ratings calculated?
To calculate the overall star rating and percentage breakdown by star, we don’t use a simple average. Instead, our system considers things like how recent a review is and if the reviewer bought the item on Amazon. It also analyses reviews to verify trustworthiness.
Top reviews

Meshal Alhosani
5.0 out of 5 stars A PC-LIKE CONSOLE
Reviewed in the United Arab Emirates on 14 November 2020
Edition: Xbox Series XVerified Purchase
the Xbox Series X feels like a PC which is good to hear
a lot of console gamers want a pc like experience, 60 fps or more
and thanks to microsoft new console you can finally have it.

As someone who plays primarily on PC, the lower frame rates and input lag on last-generation consoles are enough to put me off playing a lot of games on an Xbox One or PS4. That was until I started playing games on the Xbox Series X three days ago when it arrived,

Microsoft’s next-gen Xbox comes the closest I’ve ever witnessed to re-creating the superior PC experience of playing games, thanks to SSD storage, a far more powerful CPU, 120Hz support, and impressive backward compatibility features that improve existing games. This is all inside a 2100 dirham box that’s quieter and far easier to use and maintain than the 10k dhs gaming PC I built a few months ago.

I Highley recommend it, if you have the money, don't think twice.

Amir
4.0 out of 5 stars Why no cover correctly ?
Reviewed in the United Arab Emirates on 23 November 2020
Edition: Xbox Series XVerified Purchase
Very good but i dont like how its delivered ! Stickers on the box directly and no amazon box to keep safe the xbox box cover ! Very bad and make the box damage
Read more
15 people found this helpful
Helpful
Report abuse

Yann Gourdin
5.0 out of 5 stars Next generation is here
Reviewed in the United Arab Emirates on 29 November 2020
Edition: Xbox Series XVerified Purchase
Well, so far so good, no issues. Setup was a breeze and all my games work are copying from my One X to the Series X. It is dead silent when on. The drive is not as noisy as i have read online.
It is chonky when laid on it side but look great when standing, so people have to consider this. As for games, there are lot of potential with this console for this generation
Read more
13 people found this helpful
Helpful
Report abuse

Edward Dias
5.0 out of 5 stars Gamers this is the ultimate
Reviewed in the United Arab Emirates on 2 December 2020
Edition: Xbox Series XVerified Purchase
A great product by Microsoft for gamers. It supports all previous games a must produce for gamers. Great resolutions and pure performance
Read more
11 people found this helpful
Helpful
Report abuse

Abdullah
5.0 out of 5 stars Amazing Console !!
Reviewed in the United Arab Emirates on 22 December 2020
Edition: Xbox Series XVerified Purchase
From Me Personally Speaking. This is by far the best console design and the best gaming performance I’ve seen thus far from Microsoft !
(This console so far as much as I have played it is insanely quiet and theres no annoying sounds coming out of it at all.)

Well done Xbox Team !! 👍
Read more
6 people found this helpful
Helpful
Report abuse
See all reviews
Back to top
Get to Know Us
Shop with Us
Make Money with Us
Let Us Help You
EnglishChoose a language for shopping. United Arab EmiratesChoose a country/region for shopping.
© 1996-2021, Amazon.com, Inc. or its affiliates